Highlights from the 2016 Post-Election Report to Congress

See the full 2016 Post-Election Report to Congress here to learn about FVAP's activities supporting all UOCAVA voters, in addition to findings from post-election surveys of State and local election officials and Voting Assistance Officers.

Later this year, FVAP will release research on the voting experiences of U.S. citizens residing abroad.

Most military voters are absentee voters and face unique obstacles.

As was true in 2012, about three quarters of voting Service members did so via absentee ballot. For Service members living away from their voting State, successfully voting requires:

Their main sources of support are FVAP, Voting Assistance Officers (VAOs) in their units or on their installations, and State and local election offices. 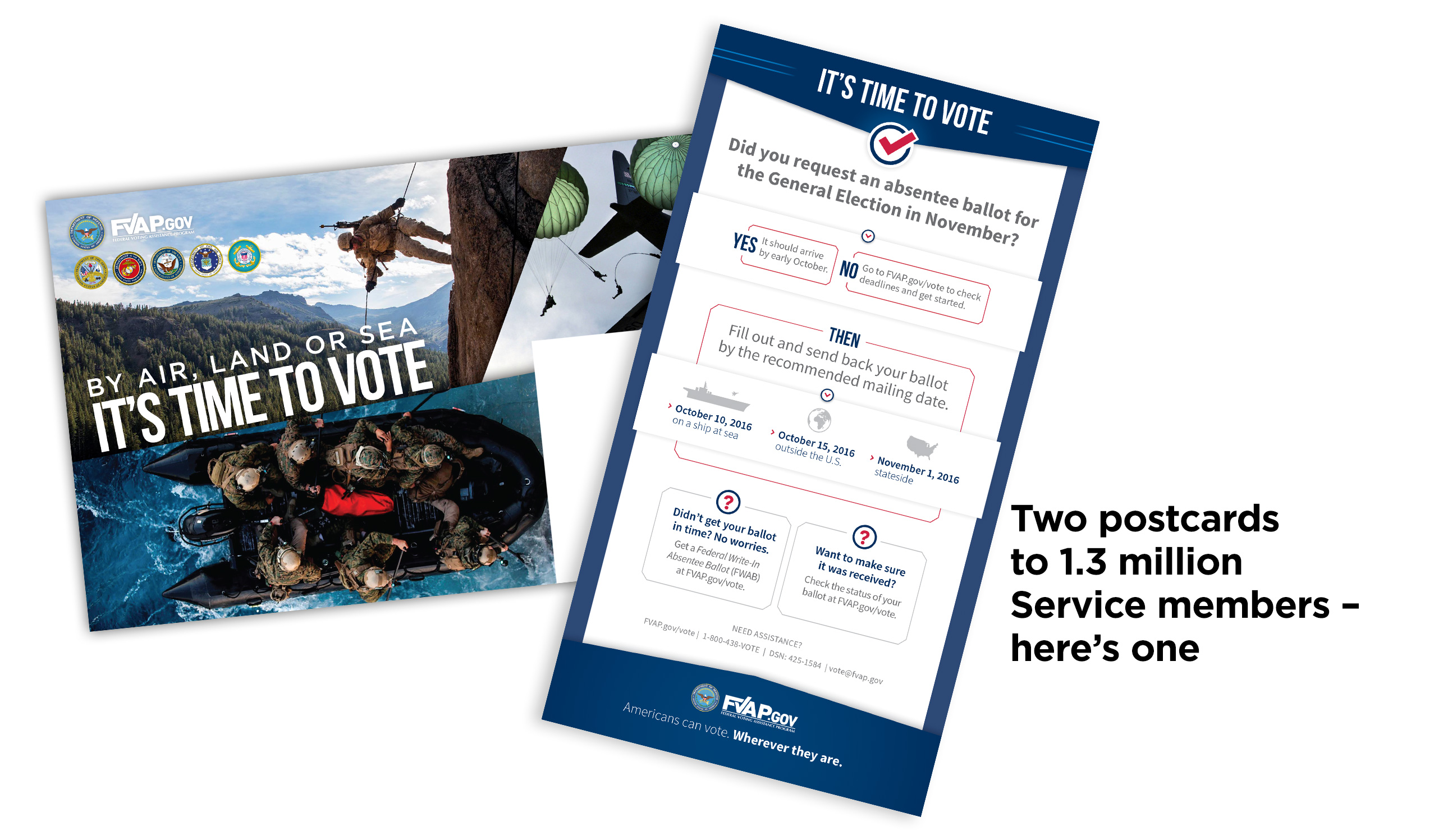 FVAP materials focused on helping Service members who want to vote overcome obstacles in the absentee voting process, such as:

Among first-time military voters, nearly all (94%) who consulted FVAP or their Voting Assistance Officer returned a ballot compared to just over half (56%) who did not get assistance.

These findings build upon research from the 2012 and 2014 elections that identified a statistically significant relationship between the likelihood of Service members returning their absentee ballot and the use of the DoD network of voting assistance resources, including FVAP, Unit Voting Assistance Officers, and Installation Voter Assistance Offices.

FVAP's voter outreach and assistance efforts proved successful in 1) improving awareness and knowledge of its voting assistance, 2) increasing knowledge of key steps in the absentee voting process, and 3) spurring key actions such as earlier ballot requests. 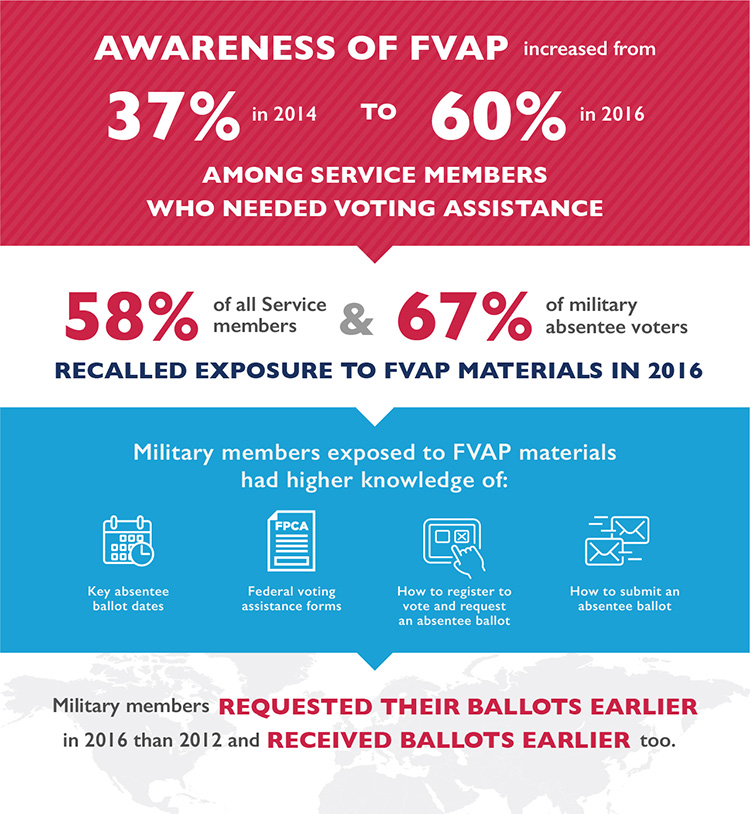 Compared to Service members age 25 or older, those 18 to 24 typically have a significantly higher need for absentee voting assistance and information on key absentee voting steps. These age differences similarly exist when examining voting attitudes. 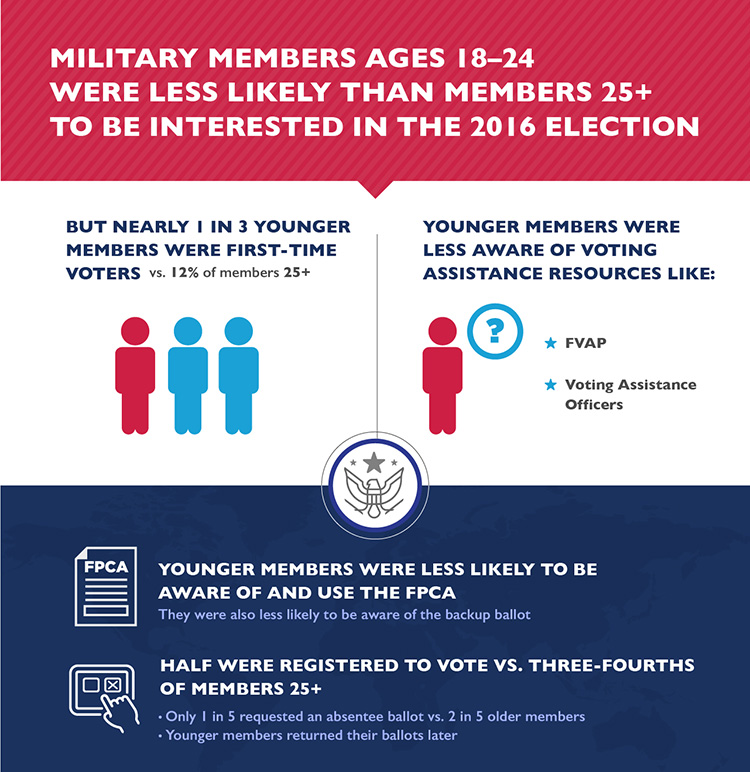 Service members' interest and voting rates (participation) fluctuate from election to election. For the past four election cycles, they have been higher during presidential election years and lower during midterm elections. 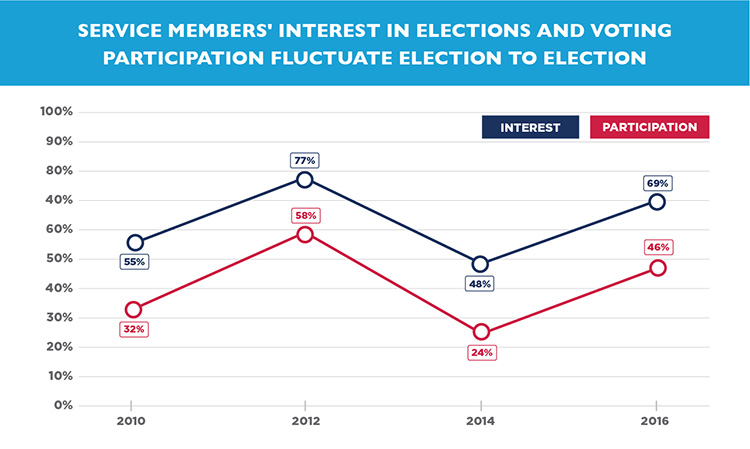 Comparing the two most recent presidential election years, the percentage who said they were interested in the election in 2016 dropped 8 percentage points from 2012; registration was down 13 points; and participation (submitting a ballot) was down 12 percentage points. Fluctuation in voting rates typically correlates with election interest, a measure of motivation.

Additionally, there were demographic shifts from 2012 to 2016 within the population of Service members that explains about half of the decline in participation.  Forthcoming research will further explore the decline.

See the full 2016 Post-Election Report to Congress at www.fvap.gov/uploads/FVAP/Reports/FVAP2016Report_20170731_final.pdf for detailed analyses of Service members' voting participation and comparisons of active duty military members to a similar domestic population. 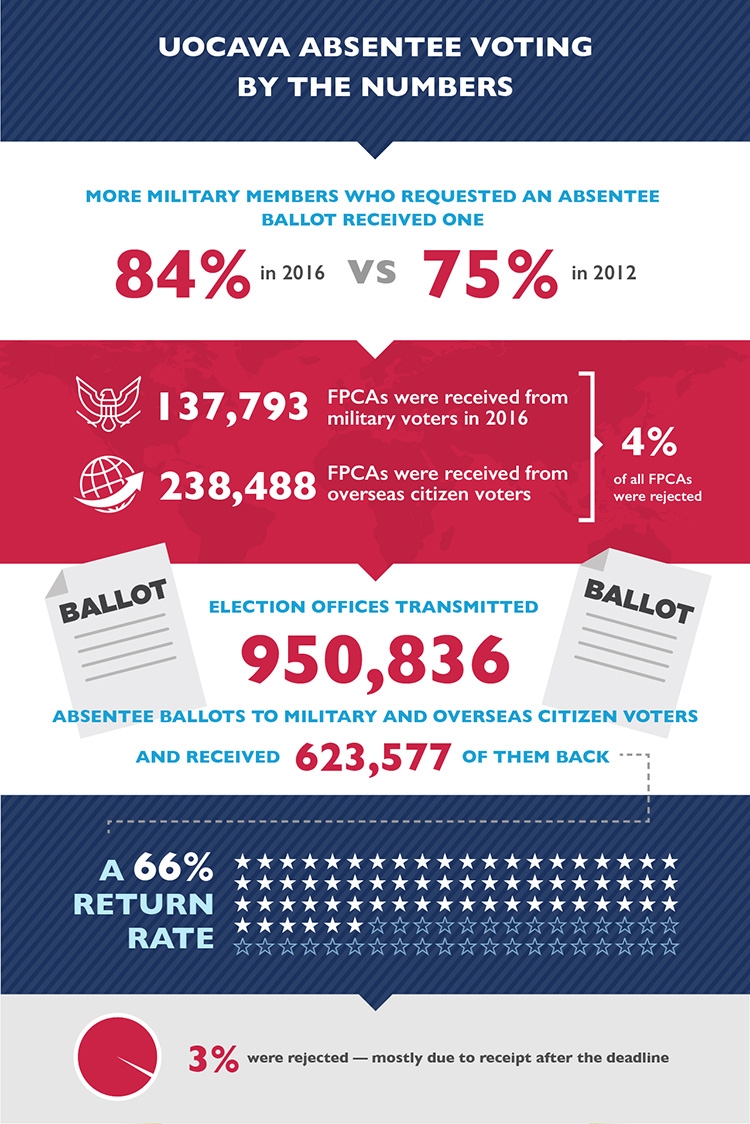 ROLE OF STATE & LOCAL ELECTION OFFICES:
State and local governments administer U.S. elections, including those for federal offices.They are an important source of information for all voters, including UOCAVA voters. FVAP works with the States in a variety of ways to improve the UOCAVA absentee voting process and provides election officials with information, training, and tools to assist eligible voters. FVAP offers four main products and services for States: the FVAP website, dedicated State Affairs Specialists, online training, and a look-up service for military addresses.

In 2016, State Election Officials (SEOs) who used FVAP products and services were happy with them, with satisfaction ratings ranging between 93% and 100%. Similarly, two-thirds of SEOs thought that FVAP information helped resolve general questions Local Election Offices (LEOs) might have, helped with UOCAVA laws, and helped LEOs be more effective.

While the vast majority of SEOs were aware of FVAP's website and State Affairs Specialists, some products and services would benefit from additional promotion:  a fourth of SEOs reported they were not aware FVAP offered online training and a third were unaware of the address look-up service. Among those aware of each resource, satisfaction was high, with strong majorities saying they were satisfied or very satisfied with FVAP's state affairs specialists, online training for election officials, military address lookup service, and FVAP.gov.

Many States only ensure UOCAVA protections -- like the 45-day ballot transmission requirement and electronic blank ballot delivery -- through the use of the FPCA. But Service members are increasingly using State and local registration forms: military members who reported using an FPCA to request their absentee ballot dropped from 47% to 39% between 2012 and 2016.

THE ROLE OF VOTING ASSISTANCE OFFICERS:
Voting Assistance Officers (VAOs) provide nonpartisan voting information and assistance to military members, their spouses, and eligible dependents on military installations or in units.

In 2016, three-fourths of Unit VAOs were very satisfied or satisfied with FVAP support and a similar proportion found FVAP's materials useful or very useful.

However, just 39% of Service members who needed voting assistance said they were aware of UVAOs, indicating this important resource needs a higher profile.

The Federal Voting Assistance Program (FVAP) works to ensure Service members, their eligible family members and overseas citizens are aware of their right to vote and have the tools and resources to successfully do so -- from anywhere in the world. The Director of FVAP administers the Uniformed and Overseas Citizens Absentee Voting Act (UOCAVA) on behalf of the Secretary of Defense. UOCAVA requires that the 50 States, U.S. territories and the District of Columbia allow protected voters to register and vote absentee in general, special, primary and runoff elections for federal offices. States and territories may have supplementary laws and requirements, which are available at FVAP.gov. Citizens whose voting rights are protected under UOCAVA include:

FVAP conducts a number of studies, alone and in cooperation with other agencies, to assess UOCAVA-covered citizens' voter registration and participation, as well as federal and State provision of voting assistance resources and citizens' use of and satisfaction with these resources.