"I am proud of the work accomplished by FVAP to support military members, their families, and Americans living abroad throughout the 2016 cycle," FVAP Director David Beirne said. "The post-election data show that military members and overseas citizens are more likely to return their ballots when they use a DoD voting assistance resource -- and our 2016 outreach activities were highly effective in letting them know about these resources. However, we must do more, particularly for first-time voters who need help navigating the process." 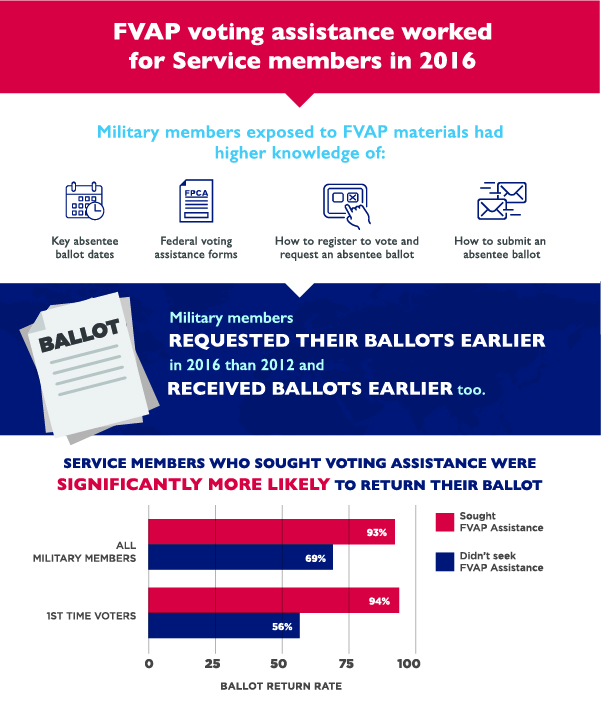 "A striking finding from our analyses is the reported drop in participation rate among military personnel in the 2016 election as compared to the general population -- but it's important to keep in mind that fluctuation in voting rates is normal and typically correlated with interest in the election," FVAP Director David Beirne said. "The data show that more military members cited motivation-related reasons for not voting and were less interested in the election in 2016 than in 2012.  We are continuing our analysis to statistically test whether this decrease can be attributed more to the decline in motivation or to barriers to the absentee voting process."

FVAP will release its findings, in addition to research on the voting experiences of U.S. citizens residing abroad, later this year.

See highlights of U.S. military voter experiences in 2016 and the full 2016 Post-Election Report to Congress at www.fvap.gov/info/reports-surveys/2016-post-election-report-to-congress.

FVAP assists voters through partnerships with the Military Services, Department of State, Department of Justice, and election officials from 50 States, U.S. territories and the District of Columbia. State and local governments administer U.S. elections, including those for federal offices. FVAP supports State and local election officials by providing absentee voting information, materials, training and guidance.